Review: I Can Only Draw Worms 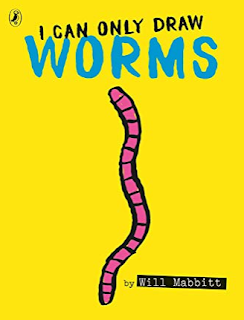 I Can Only Draw Worms by Will Mabbitt lives up to his initial claim that he can only draw worms. The art is terrible. The entire book is composed of pictures of worms that look like they've been drawn with a black marker and two highlighters. It's also terribly clever and hilarious. I was laughing. What I Can Only Draw Worms lacks in pictures, it makes up for in jokes. The premise is a basic counting book, and the worms go and have adventures and are confused with each other because they look so much alike. No matter what adventure the worms have, we only see the worms. Because Mabbitt can only draw worms, apparently. And half worms. Poor worm eight, and poor worm eight and a half. You are not two worms. Sad but funny. So funny.
I Can Only Draw Worms is encouraging, because it shows you don't have to be a great artist to create enjoyable art. Mabbitt is engaging and comedic, and plays to those strengths.
Five stars!