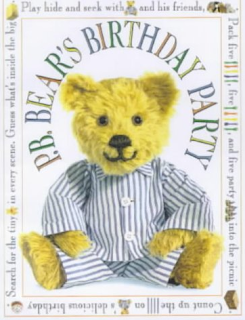 P.B. Bear’s Birthday Party by Lee Davis is about a stuffed bear who has a birthday adventure. He receives a big box in the mail, and his friends come for a birthday party. They bake a cake, open the big box, and set off for a picnic. It’s a nice afternoon outing out in the country.
The art is photographs of stuffies, all placed in a scene like stop-motion characters. The text is interspersed with pictures, so instead of reading “P.B. Bear” there will be a little picture of P.B. Bear. The pictures are simple objects, so it was pretty easy to follow. It took me a couple times to remember all the animal names instead of just saying “the dog,” but there is a glossary of labeled pictures on both of the inside covers.
This is the book to read again and again and again, according to an adorable two-year-old.
5 stars!
If you need more, the four original books are:
All follow the same general plot. P.B. Bear’s Treasure Hunt has more puzzles with things to find. P.B. Bear’s School Day has a lot of arts and crafts related objects. Lee Davis wrote more P.B. Books, and there was also a short T.V. series.
Book Review Picture Book