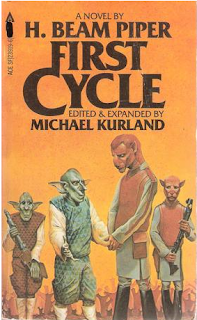 First Cycle, by H. Beam Piper and Michael Kurland, is entirely a world-building book. It follows the evolution of twin planets, and the societies that eventually thrive on them. The first few chapters follow planetary collision and evolution. However, as soon as intelligent life appears, the recorded passage of time slows down, becoming a series of short stories covering interesting characters at significant points in history.

Thalassa, the world with great oceans, evolves six-fingered green people, who quickly assemble into a basic patriarchal feudal system. The Thalassans are a war-like people; technological advances and trade are generally intertwined into the endless onslaught of war.

Hetaira, the world with land and scattered lakes, takes longer to evolve, but by and large skips the prolonged war campaigns of its twin. The red-furred people of Hetaira live in family “gangs,” and are constantly sharing information and improvements. Although gangs occasionally combine, each is effectively its own nation. Interestingly, the females are nearly the same size as the males, and thus Hetaira is generally gender-equitable.

It’s a wonderful book for world-building. The chapters mostly alternate between Thalassa and Hetaira. First Cycle is written entirely in the third person. Instead of following one or two characters, each era centers on a group of Hetairans making advancements, or the current geopolitical and military campaigns of the Thalassans. Piper and Kurland have used a lot of altered Earth history to put the two groups together, but each group has altered the themes to make them their own. As the book goes on, we stay with each group longer. Once the planets begin their space age, there are recurring characters as the pace of advance becomes faster and faster.

The main author, H. Beam Piper, died in 1964. First Cycle was finished by Micheal Kurland, and published in 1982. I’m giving it four out of five stars because I enjoyed it enough to try other books by these authors. I liked it because the ideas and writing style are different, which is especially important for keeping science fiction fresh. If you’re looking for a character-driven story, this isn’t it. If you’re looking for something different, or an inspiration to beat writer's block, this is a good book to read. First Cycle teaches a lot about worldbuilding, and there is enough information in most of the glimpses into each century to develop characters for a longer novel.

While First Cycle is still under copyright, many of H. Beam Piper’s other works have fallen into the public domain (at least in the States).