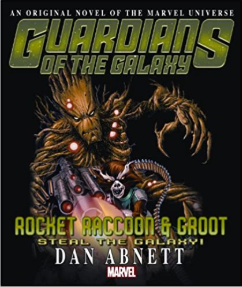 Review of Guardians of the Galaxy:

This dramatic graphic audio follows the adventures of Rocket, a genetically modified, cheerfully trigger-happy raccoonoid, and his walking tree sidekick, the mighty Groot. This is a really fun audio book. The dramatic recording is complete with an excellent voice cast, music, and sound effects. The recorder is lovable and while he is rather helpless in a firefight, his skill is his vast database, which continually provides useful information. There is a lot of action, and a lot of plot in every chapter. Dan Abnett wrote this as a comic book in prose form, recorded by very good voice actors. I really enjoyed listening to this, it non-stop action, and the story really drew me in.

Their adventure is narrated by Rigelian Recorder 127. Recorder 127 contains a vital piece of information needed to create a device to control the multiverse. Unfortunately, he has no idea what this information is, and he has very large memory banks. Fortunately, Recorder 127 has fallen into the company of Rocket and Groot, who are on an independent trading excursion from the other Guardians of the Galaxy. Multiple galactic powers are in pursuit of them, including the Kree, the Nova Core, and a Black Knight with a Teleportation Plot Device. There is no shortage of action, danger, jeopardy, and shooting. A lot of shooting. Mostly by a raccooniod with “freakishly human-like hands.”

Rocket Raccoon and Groot Steal the Galaxy is also available in book form. The graphic audio has been abridged to about six hours, which was perfect for listening to at home over the course of a week. It’s a hoot. They are all literally running around, running out of danger, and inexplicably attracting danger in absurdly silly ways.  Five of five stars. Definitely a good book for a repeat listen. If you like action/adventure comics or Marvel, you will like this audio-book.

For those following the Marvel Cinematic Universe,  this story is on a slightly different timeline. The team is alive on hiatus, and Groot is an adult.  You don’t need the movies to understand the story. If you have seen the movies, don’t worry, this is a whole new plot.

Contains comic violence and tight clothes. Objectionable words have been replaced by “flark.” It’s probably at the higher end of PG and the lower end of PG-13.