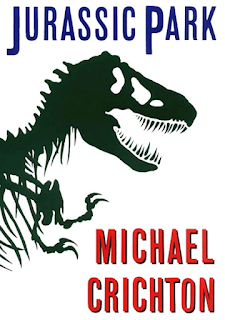 A review of Jurassic Park

The field of genetic technologies booms. Cutting edge genetic scientists are whisked away to build an ambitious dinosaur theme park. Problems soon arise: The story opens on the adjacent mainland, where the reader is given the distinct impression that some of the dinosaurs may have already escaped. To allay investor concerns, John Hammond, the park owner assembles a team of experts for a tour. Unfortunately, an attempt at industrial espionage shuts off the fences, stranding the experts (and two children) in the middle of Jurassic park.

This is a good read, even if you have already seen the movie. The plot is much more complicated and involved then the film adaption, and the characters are more developed. Dr. Grant loves children, especially dinosaur-obsessed children. Their adventure together is much longer and more exciting then the film version. There is an overabundance of detail in every scene. The dinosaur behaviors are extremely comprehensive and consistent. Modern bird and reptile hunting styles have been considered and used to enhance the details of the dinosaur’s hunts.

The first third sets up the premise in a series of scenes, which include technical explanations for everything from genetic sequencing to paleontology to investors speculating on potential profits. Also, an interesting investigation of dinosaur attacks helps keep up the pace.

The final two-thirds is just straight-up action-packed adventure. The elaborate security measures are down! Dinosaurs have escaped! Lovable characters are being hunted! Annoying characters are being eaten! The only gun on the island capable of stopping a tyrannosaurus rex is missing! Amidst all the confusion, Dr. Grant and his two new wards must embark on an arduous trek through some of the most dangerous paddocks on the island. Only time is running out, because they possess information that may be vital to the survival of untold others!