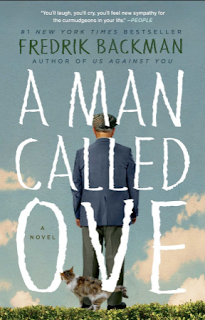 A Man Called Ove by Fredrik Backman is a sad, humorous, drama of grief, life and death. Ove is a stubborn, difficult, and rather taciturn man, who is grieving the loss of the love of his life. Since his wife died, Ove, (who was never very outgoing to begin with), has withdrawn from the world, barely talking to others. His grief is very real and poignant, and it isolates him.

Ove's grief comes to a crisis point when he is suddenly retired from the job he held for three decades. Ove struggles with the new lack of defined purpose. His sees retirement as becoming superfluous. In his view, retiring means “wandering about, a burden on society, what sort of man would want that?” Ove can choose to die, or process his grief, and learn to interact with life instead of withdrawing from it. Now, just when Ove has decided to join his wife, his new neighbors back their trailer into his mailbox. His new neighbor is Parvannah, a kind pregnant woman who sees through Ove's gruffness, and befriends him.

The contrast between how Ove views the world and how everyone else does is humorous. Ove has not adapted to modern life. His phone has a line, his car has a manual transmission, and he only has a bank card because his wife left one without spending all the money on it. He doesn't know how to deal with his new neighbors, especially when Parvannah takes charge.

Ove’s character is developed in a series of flashbacks detailing defining moments in Ove’s life. His character maintains remarkable consistency, while still showing growth over time. His memories show why Ove became this way, and how early experiences and grief create lasting impressions over multiple generations. His struggles are real and relatable. The way the characters interact is genuine. Ove’s obstinance to lives by his own set of rules is consistent throughout. He will argue with salesclerks and boycott shops over pocket change, and at the same time making serious efforts to help the “incompetent” people around him. As grumpy, argumentative, and difficult as he is to talk to, he shows up when people need him. He can be kind, thoughtful, and useful. He can be vulnerable and sweet. Ove is a redeemable character, which evokes reader sympathy. We want Ove to thrive, even when he has decided otherwise.